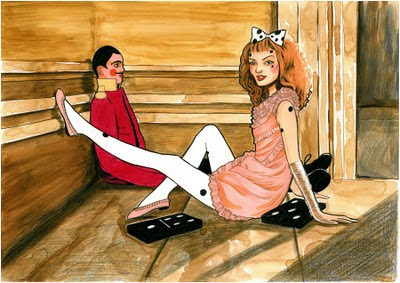 November 2009 saw the launch of illustrator Louise Andersone's long awaited art exhibition where hundreds of members of the general public were invited to see the fantastic artwork on show whilst tickling their taste buds with delicious indian cuisine.
Set in the prestigious Tiffinbites in Bank, the exhibition proved to be a huge success with those who attended, which included the specially invited press from 'Ballad Of...' magazine, a scout from Sony BMG and press from 'The Afronews'.
The guests were also entertained by the fresh urban talent on show which included singer and song writer Sloozie who performed her hits 'Lovely Day' and 'Follow Me'. Sloozie, who recently entered a BBC performance competition, is well known for her original lyrics and various self directed videos on MySpace and Youtube.
Sassy singer, Nicole Sonia, also performed Beyonce's hit single 'If I Were a Boy' live on stage at the venue and wowed the crowds with her big voice at the tender age of 16.
Amongst the live artists were stunning works produced by Mohammed El Haddi, Farida Begum and Mary Ibeh which brought diversity to the show. Jewellery designer, Melissa Leon, showcased her fantastic new line named 'The Westnic Collection' and offered a mini jewellery workshop where you were able to create your own jewellery.
The night ended with soothing jazz music from authentic saxophonist Lydia Pearce, whose talent kept the invitees wanting more.
Presenter Richard Andersone from Liberty Radio, who hosted the event, gave his thumbs up and confirmed that 'it was the art exhibition of the year!'. 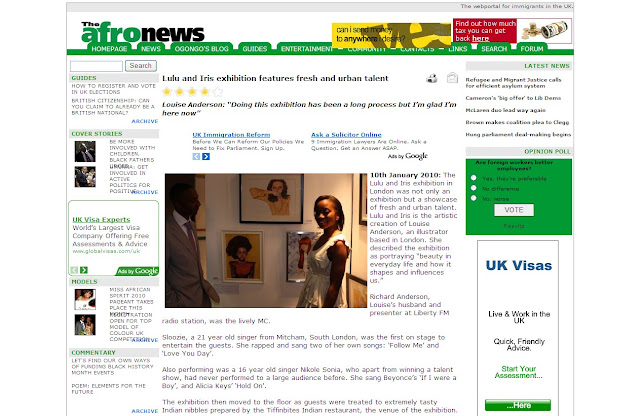 Blogged by Louise Andersone at 10:47

Louise Andersone
London, United Kingdom
Lulu and Iris is the artistic creation of Louise Andersone, a freelance illustrator based in London. If you are interested in commissioning her simply e-mail louiseandersone@yahoo.com